Yakko Tako is a heptaptych (a collection of seven images) in “Neo-Ukiyo-E” style representing the passages of a dream of a traditional Edo period servant to a Samurai of the Tokugawa clan. Each image depicts the story of how traditional Yakko-Dako (奴凧) kites came to be.

This painting shows the Samurai’s servant taking care of his Samurai master. The servant wears the traditional robes showing the “servant” emblem on his shoulders and arms. yakko refers to the servants of samurai during the Edo period in Japan. They wore a vest on which the “nail-puller crest” was attached, on the shoulders; therefore, cutting something (e.g. tofu) into cubes was called “cutting into yakko” (奴に切る, yakko ni kiru). 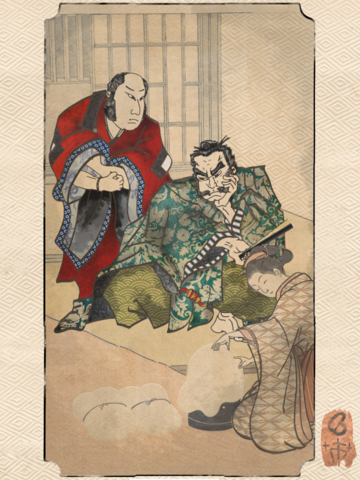 This painting shows the Samurai’s servant falling asleep when he actually had to take care of helping his Samurai master to prepare for the Sekigahara battle. The Battle of Sekigahara (Shinjitai: 関ヶ原の戦い; Kyūjitai: 關ヶ原の戰い, Hepburn romanization: Sekigahara no Tatakai) was a decisive battle on October 21, 1600 (Keichō 5, 15th day of the 9th month) in what is now Gifu prefecture, Japan, at the end of the Sengoku period. This battle was fought by the forces of Tokugawa Ieyasu against a coalition of Toyotomi loyalist clans, several of which defected before or during the battle, leading to a Tokugawa victory. The Battle of Sekigahara was the largest battle of Japanese feudal history and is often regarded as the most important. Toyotomi defeat led to the establishment of the Tokugawa shogunate. 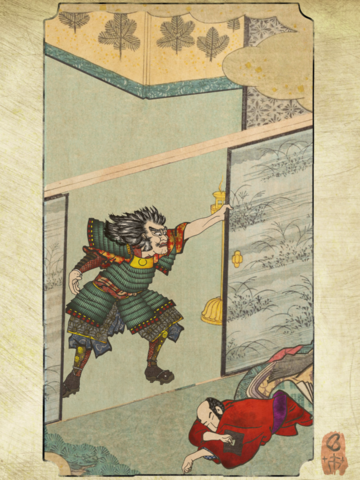 This painting shows the Samurai’s master rage after discovering his servant sleeping on the floor. He invokes Akkorokamui (originally from Ainu mythology), a minor kami, to capture the servant. The servant tries to escape by transforming into a kite. 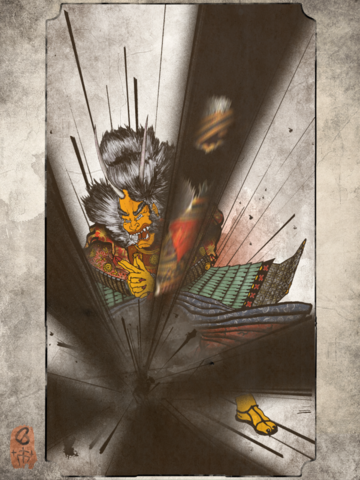 This painting shows Akkorokamui emerging from the water within an adapted background of the Yoshitsune Falls from the ukiyo-e master Katsushika Hokusai, year ca. 1832. Ainu reverence of this monster has permeated into Shinto, which has incorporated Akkorokamui as a minor kami. Self purification practices for Akkorokamui are often strictly followed. While Akkorokamui is often presented as a benevolent kami with powers to heal and bestow knowledge, it is fickle and has the propensity to do harm. Akkorokamui’s nature as an octopus means that it is persistent and it is near impossible to escape its grasp without permission. 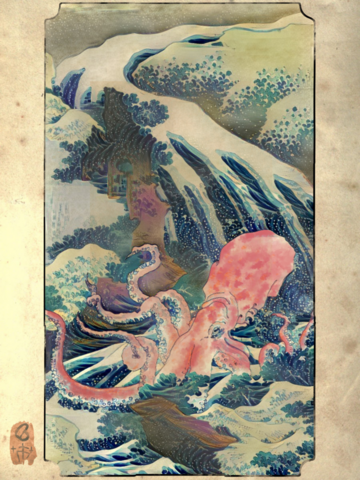 This painting shows Akkorokamui flying after the servant in his Yakko-Dako (奴凧) form within the Naruto Whirlpool of Awa Province originally created by Utagawa Hiroshige in 1855. 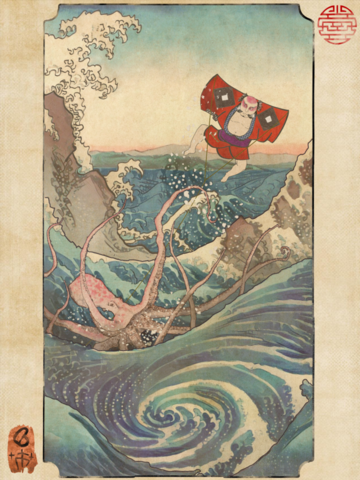 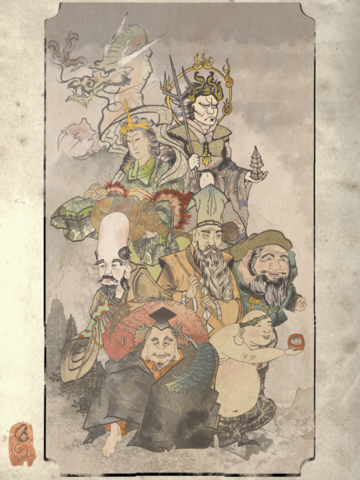 It is said that the Buddhist priest Tenkai selected these gods after speaking with the shōgun he served, Iemitsu Tokugawa, at the order of seeking whoever possessed the perfect virtues: longevity, fortune, popularity, sincerity, kindness, dignity, and magnanimity.

Shortly after a famous artist of the time, Kano Yasunobu, was ordained to portray these gods for the first time ever.

This painting depicts 7 Daruma dolls each of them gifted by each of the “7 Lucky Gods”. Each daruma has a specific power and a specific color to help save the servant escape Akkorokamui. Daruma has a design that is rich in symbolism and is regarded more as a talisman of good luck to the Japanese. Daruma dolls are seen as a symbol of perseverance and good luck, making them a popular gift of encouragement. The doll has also been commercialized by many Buddhist temples to use alongside the setting of goals. 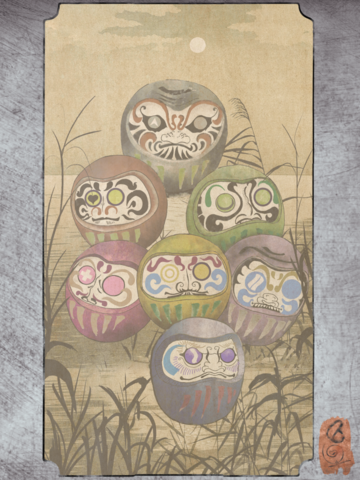 We use cookies on our website to give you the most relevant experience by remembering your preferences and repeat visits. By clicking “Accept”, you consent to the use of ALL the cookies.
Do not sell my personal information.
Cookie SettingsAccept
Manage consent

This website uses cookies to improve your experience while you navigate through the website. Out of these, the cookies that are categorized as necessary are stored on your browser as they are essential for the working of basic functionalities of the website. We also use third-party cookies that help us analyze and understand how you use this website. These cookies will be stored in your browser only with your consent. You also have the option to opt-out of these cookies. But opting out of some of these cookies may affect your browsing experience.
Necessary Always Enabled
Necessary cookies are absolutely essential for the website to function properly. These cookies ensure basic functionalities and security features of the website, anonymously.
Functional
Functional cookies help to perform certain functionalities like sharing the content of the website on social media platforms, collect feedbacks, and other third-party features.
Performance
Performance cookies are used to understand and analyze the key performance indexes of the website which helps in delivering a better user experience for the visitors.
Analytics
Analytical cookies are used to understand how visitors interact with the website. These cookies help provide information on metrics the number of visitors, bounce rate, traffic source, etc.
Advertisement
Advertisement cookies are used to provide visitors with relevant ads and marketing campaigns. These cookies track visitors across websites and collect information to provide customized ads.
Others
Other uncategorized cookies are those that are being analyzed and have not been classified into a category as yet.
SAVE & ACCEPT